The new Barša number 4 said in his presentation that the club "has made my dream possible" and stressed that heĺs fully prepared to "take on whatever role Iĺm givenö.

There was maximum excitement in the Sala Paris. The return of Cesc Fabregas to Barcelona is not just any homecoming. Eight years after leaving for London, Cesc has come home to fulfill a dream.
Before starting to talk and answer the relevant questions, Cesc stared open-mouthed at the images being projected. A video showing images of Fabregas in the youth teams. "Watching these images it‘s like I’d never left," he said.

Thanks to the Club 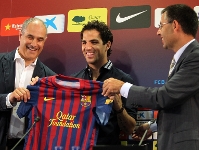 The effort made by Barša to sign him hasn’t gone unnoticed by Fabregas, who wanted to give his thanks to everybody concerned. "I want to thank all the people involved, from President Sandro Rosell, to Josep Guardiola, who has been very important to me" Cesc recognised. He also wanted to thank Thiago Alcantara who has given up the number 4 shirt, in a gesture which, according to Cesc, "honours him".

He also stressed that "it’s not easy to have confidence again in someone who left the club at youth level", referring to him going to England when he was 16.

"I'm ready to take on whatever role I’m given. I’ve chosen the harder path, but the most rewarding for me" said a Cesc Fabregas with very clear ideas. He also explained that coming to Barša, and weighing up the other options, "is the toughest challenge of my life". His initial goal, however, is "to improve a little what is already the best team in the world".

The new Barša number 4 made it very clear that he’ll give "up to my last drop of sweat for Barša" and that never, even being far away, "have I stopped loving Barša". 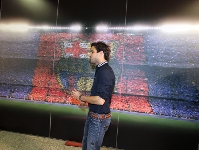 Barša have made my dream come true and I just hope that no one ever regrets it" said Fabregas adding that, today, "a great weight off my mind" has been lifted, signing for Barca. He also added: "You can tell by my face how happy I am”, even though he’s aware that some people will “demand twice as much from me".

"Wegner has a negative image here, but it’s not true, I can assure you," said Cesc. For Fabregas the French manager "is really special and a second father to me, because he’s given me everything in the world of football". He also said that if today he’s a Barša first team player "it’s also thanks to Wenger".