Bartomeu: "The final push was given by the player"

Bartomeu thanks Cesc for his efforts to come to Barça

The Vice President of the Sporting Area values very highly the attitude, and effort that Cesc Fabregas made to help complete his signing for FC Barcelona. "He’s a signing that we’ve all wanted for a long time and finally he’s here" he said. 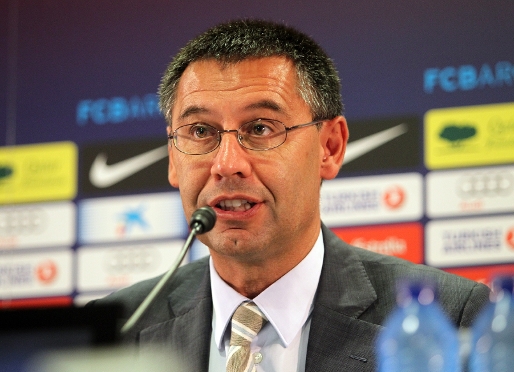 During the official presentation of Cesc Fabregas as a new FC Barcelona player, Josep Maria Bartomeu, who accompanied the player along with the Director of Professional Football, Andoni Zubizarreta, detailed the specific figures of the player’s transfer from Arsenal. He explained that the transfer of Cesc closed at 29 million Euros, half to be paid now and the rest in September. His contract is for five years and the buyout clause has been set at 200 million Euros.

Additional effort by the player 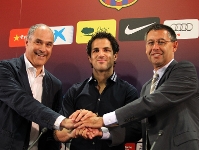 In this regard, and after giving general thanks to "all the people from Barça who have put in effort to complete this signing" he gave special thanks to the attitude of the player. As explained by the Vice President of the Sporting Area, during the first five seasons Cesc will give up one million Euros per year, which will be paid to Arsenal. "We really have to thank Cesc for the effort he’s made to come here" he said. Along the same lines, and after pointing out that FC Barcelona’s financial limitations have been "the biggest brake" in negotiations with Arsenal, Bartomeu stressed that "the final push was given by the player".

"Reaching agreement with him was easy. He really wanted to come, but obviously Arsenal didn’t want a great player like him to leave. The negotiations began after the Champions League Final. The 29 million Euros is the figure we’ve maintained from the outset, but it’s clear that the push that Cesc gave has been very important to make his signing a reality" he added.

Finally, Bartomeu confirmed that, although the signing has been a lot more complicated than initially expected, throughout the negotiations FC Barcelona has achieved "the normalisation of relationships with Arsenal."

The Director of Professional Football, Andoni Zubizarreta, acknowledged the difficulty in explaining things about Barça’s new player "being already known as a player, from this club, with a history and a known and proven track record". However, he explained that what is sought from Cesc’s joining is "competitiveness, versatility, the ability to compete and look for success…..Cesc belongs to that percentage of players in the market who we believe will give us something different" he said, just before mentioning the competition that Cesc will be facing in midfield.
On the other hand, Zubizarreta confirmed that at the moment the possibility of incorporating another player to complete the FC Barcelona squad is not envisaged, whilst at the same time pointing out that "the market never closes for a team like Barça".