Cesc has finally joined FC Barcelona, after signing a contract for the next five seasons. His buyout clause will be 200 million Euros. 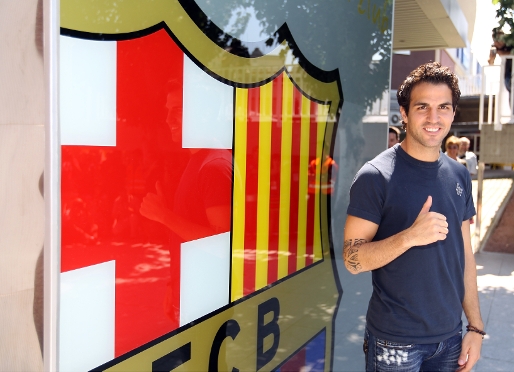 More info
It was just after 13.00 when Cesc Fabregas signed his contract with FC Barcelona that will keep him at the club for the next five seasons, meaning that Cesc will be wearing the Barńa shirt until 2016.
The signing of the contract took place at the FC Barcelona offices and was attended by Fabregas and the Barńa President, Sandro Rosell. Also present were vice president of sports, Josep Maria Bartomeu, the sports director of professional football, Andoni Zubizarreta, and director of football, Raul SanllehĒ.

The buyout clause of the new FC Barcelona player is 200 million Euros. 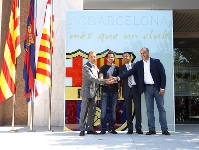 Photo with the club plaque

As is traditional, once the contract had been signed, Cesc appeared at the front of the offices to have his photo taken in front of the Barńa plaque. Expectation was huge, with many photographers and television cameras waiting to capture this image. Sandro Rosell, Josep Maria Bartomeu, and Andoni Zubizarreta also appear in the photograph that will now be part of the club’s album.