Guardiola: "It's a final: no excuses"

Guardiola: "It's a final: no excuses"

Despite having the whole squad around for only the past two days, Josep Guardiola doesn’t want any excuses ahead of the Spanish Super Cup which starts this Sunday at the Bernabeu. "This is a final and whoever wins will be the best team" he said.

For the Barça manager, playing the Spanish Super Cup is always good news. "We are fortunate to be playing it. It means we won something last season. We’ve been in it for the last 3 years" he said. After his words of praise for the competition, Guardiola is aware that the circumstances around the timing of the Super Cup, and the team they are playing, are not altogether favorable. "We’ve only been two days all together and Madrid has had a flawless preseason. From what I've seen, they’re just like they were last year".

Who will play is the big question

After only two training sessions with the entire squad, together with the fact that lots of the players haven’t played in the preseason with the team, like Alexis, Mascherano, Messi and Alves, there is a big question mark about who’ll start in Madrid. "Messi and Mascherano have come back looking in good shape. They are the ones who have had the shortest holidays, only three weeks. When you have less time off you need less time to get into shape" he said about the Argentinian players. With regard to the others, Guardiola prefers to wait until Sunday. However, he warned that not all players are ready to play 90 minutes.

To the Bernabeu with ambition 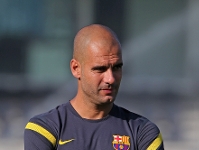 Guardiola wanted to make it clear that there will be no excuses. "We’re playing a final and there can’t be any possible excuses. If I’d wanted them to be fitter then I’d have called them back earlier. The rest was important" he stressed. However, he warned that a 3-1 defeat like last season’s first leg of the Super Cup against Sevilla, would be practically definitive against Real Madrid. "The tie will be practically decided on Sunday. Whenever we’ve come back with a good result from the Bernabeu it’s because we’ve been ambitious" he added.

"It will help us to get into competitive shape"

The fact that they’re playing Madrid early on also has its positive side. According to Guardiola it will "help us to get into a competitive frame of mind for the near future", because the European Super Cup, and the start of the League, come immediately after the double battle against Madrid.

How are Real Madrid going to play? "It's very difficult to figure out how they’re going to play. They sat back in the first half of the first leg of the semifinals, and in the second half they pressurised us high up the pitch. They have a lot in their locker. We have to be cautious. Beating them is really tough" he stressed.

Puyol close to being fit 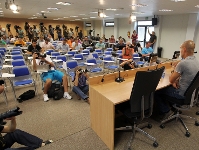 Looking beyond the Super Cup, Guardiola has discarded signing a central defender and indicated that Carles Puyol’s recovery is on the right track. "I'm not a doctor, but I think that in a short time he’ll be back with us. He’s training without pain" he said.

With regard to Cesc he reminded everybody that "he’s not here yet….according to the information I have, everything is very advanced but not quite finalised. He’s still an Arsenal player. If he comes or not, Barça will still have a good midfield" he concluded.