“The Supercup is a vital trophy”

Valdés: “The Supercup is a vital trophy for us”

Víctor Valdés said today that the Spanish Supercup “is a vital title for us, it’s the first official trophy of the season and of course we want it”.

Sunday’s game with Real Madrid is all the players are thinking about at the moment. The Barça keeper said the squad “has worked hard on fitness” throughout the preseason, and is ready “to go for it. Finals are finals, and they are decided by little details”.

Valdés agrees that the Supercup is particularly special this year because it’s between FC Barcelona and Real Madrid, but “it’s special whoever you play against.” He didn’t want to comment on which side is the most ready for Sunday’s challenge, preferring to say that all he wanted was for “Barça to end up winning it”.

The holidays are for reflecting on the season gone by and celebrating success with family and friends. But Valdés says that “when the preseason starts, you have to turn the page … We can’t live from memories. Now is the time for new challenges and expectations”. 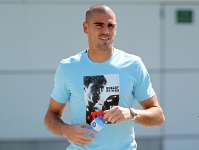 On new signing Alexis, he said “I sense he wants to learn, he wants to adapt as quickly as possible to our ways. He’s fast, he likes to score, he’s good at the one on one, and is adapting well to things the boss wants from him. He is very good in front of goal, he has innate qualities.”

Víctor Valdés also spoke about his international team mate Cesc Fŕbregas: “He is a great player, with tried and rested abilities. He could bring a lot of quality to our midfield, which is already a quality one. He has loads of talent, he is ideal for our style of play.”