Mascherano: "Super Cup won’t lay down a marker for the rest of the season"

Speaking at a press conference before this evening’s training session, Javier Mascherano insisted that the result of the Spanish Super Cup would not lay down a marker for the rest of the season, whilst accepting the importance of the clash.

The Spanish Professional Footballers Association (AFE) announced today that they had declared a strike for the first two weeks of the Spanish League season in an attempt to get their collective agreement signed. Mascherano told reporters that captain Carles Puyol, who attended the meeting that decided to take the action, would be explaining the situation to the rest of the squad: “but let’s just hope that we can reach a solution quickly and the league can start as planned”.
A game between Real Madrid and Barēa is always important, no matter at what point in the season it happens and although the Argentinean accepted that the squad were still a bit short of pre-season preparation, but insisted: “regardless of the form we might be in, this is a derby game and there is a title at stake”

Mascherano himself didn’t come back from his summer break until this Monday after figuring in the Copa America, and not until this evening will he have the chance to train with the complete squad, as a result of this week’s international games.

Value of the Super Cup title

Sunday night at ten o’clock sees the 2011-12 season kick off with the first leg of the Spanish Super Cup at the Bernabeu, but Mascherano reckons the result: “won’t be a big influence on the rest of the season, though a victory will give whoever takes wins a boost”. 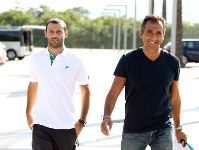 Although he’s only been under Guardiola’s orders for less than a week, Mascherano is keen to assure the boss that he’s ready to play on Sunday and even slot in at centre half if needed: “I feel good because even though I only came back a few days ago, I did a bit of training on my holidays”. Javier also commented that his friend and fellow Argentinean Leo Messi: “looks like he’s not been on holiday at all –he’s feeling perfect in training”.

With the possibility of Cesc Fabregas joining the Club one of the big talking points in the media today, Mascherano was naturally asked for his opinion of the Arsenal man, who he faced a number of times when he was at Liverpool himself and after explaining that he was confident the Catalan would indeed join the Club, he commented: “you can’t question his quality as a footballer. He’s a great player”.

The protracted negotiations for Cesc brought back memories of his own transfer just a year ago and Mascherano explained: “from the first moment that Barēa showed an interest in me, I was clear that I wanted to come here and last season showed that I was right to take the step that I did”.

Alexis should fit in easily

As for the big signing Barēa have already made this summer, Mascherano is sure that Alexis Sįnchez will adapt quickly to his new Club: “my experience is that he won’t find it hard –he’s going to come into a spectacular group and he also has the advantage of having worked with Bielsa who is similar to Guardiola tactically, so he’ll know our system”.