Ten first team players, including Puyol, Xavi, Maxwell, and Afellay, who all trained away from the main group, four from the B team, and one youth team player, took part in training this Wednesday morning. 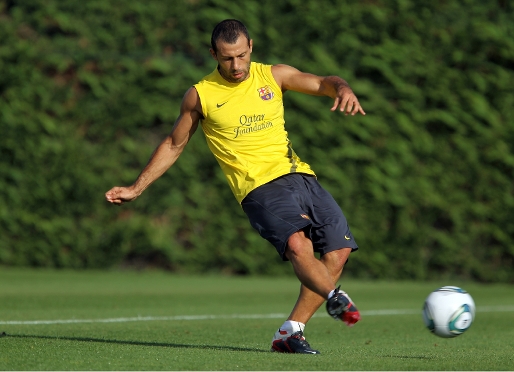 Thursday, August 11th: 19.00
Friday August 12th: 9.00 and 19.00
Saturday August 13th: 9.00
Josep Guardiola, as happened in training on Tuesday, couldn’t count on the players who are with their national sides, playing in international friendly matches. This Wednesday, aside from the players who are doing specific training whilst recovering from injury, the main group included Jose Manuel Pinto, Javier Mascherano, Seydou Keita, Adriano Correia, Lionel Messi, and Andreu Fontąs. During the session they did some physical excercises, some ball work, and appropriate stretching excercises.

The B team players who took part in the session were Martin Montoya, Jordi Masip, Cristian Lobato, and Albert Dalmau. The youth player, Pol Calvet, completed the group.

Working away from the main group

Captain Carles Puyol, and Xavi Hernandez, followed their specific recovery schedule. Puyol is still recovering from his knee injury and Xavi is working to overcome the calf problems that prevented him going to Italy with the Spanish National team. As for Maxwell Scherrer and Ibrahim Afellay, they both did some specific excercises away from the main group.

At the end of training the Argentina women field hockey team had their picture taken with members of the Barēa first team. The Argentine side includes stars like Luciana Aimar 'La Maga', considered the “Messi” of female hockey. Aimar, indeed, had her photo taken with fellow countryman Leo Messi.