“We didn’t deserve such punishment”

Eusebio: “We didn’t deserve such punishment”

After the defeat, the manager praised his team on their efforts despite losing the Copa Catalunya final 3-0, a result he felt didn’t reflect the way his players had performed on the night. 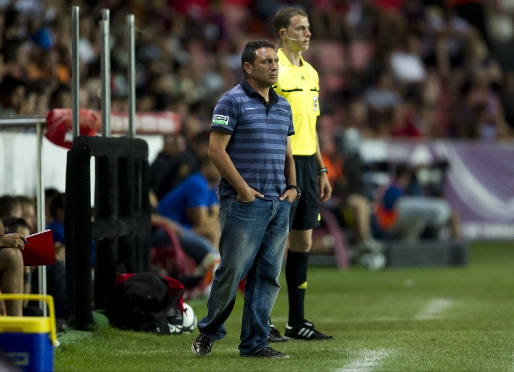 Although he missed out on the Copa Catalunya, Eusebio Sacristán is not returning from Tarragona in disappointment. Barça were missing their first team players after the US tour and due to international duty. “We have hardly been able to train as a group at all” he lamented after fielding a side made up entirely of B and youth players. “But they made every effort and showed attitude and mentality at all times”. 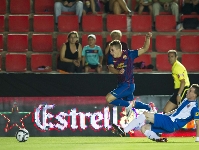 Analysing the game with Espanyol, Eusebio said “the first half was very even although we struggled to get into our game. They had more chances, and dominated the game more. But we had chances early on and if we had scored them, we could have tipped the balance of the game in our favour”.

But finally it was Espanyol, thanks to a brilliant Thievy, who won the 22nd edition of the Copa Catalunya. “In the end, they made a massive effort and I don’t think we deserved such punishment”, said the manager.

Eusebio knows that the preseason has been strange one for Barça B, as they are missing players that are away at the Under 20 World Cup in Colombia or that are training with the first team. But games like tonight’s are handy “for trying things out and getting the group into the right form”.

Asked about youth players Deulofeu, Espinosa and Grimaldo, Eusebio doesn’t want to rush them into Barça B. “We have to evaluate their performances in competitions. We’ll see whether these players are ready for the switch to second division football”.

The following are some of the comments made by the FC Barcelona players:

“The result was excessive. We tried our best at all times but football sometimes punishes you like that”.

“The positive thing is that we fought to the end”.

“We were struggling for players but we managed to adapt to the circumstances”.