Barça has the best record of all teams in the Spanish Supercup with 9 titles, four in the last six years. Next on the list is Real Madrid with eight. 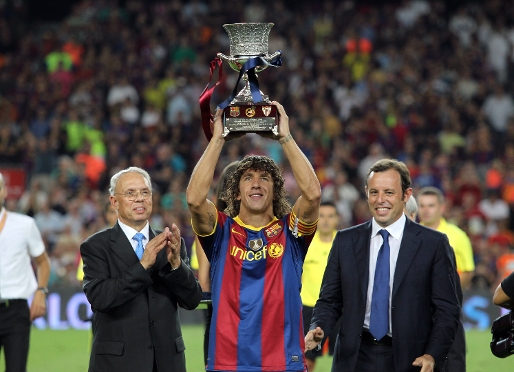 The football season is about to get serious for the first team – with a game against Real Madrid for the Spanish Supercup. It’s the first time they have met in the event for 16 years, with the first game on Sunday at the Santiago Bernabéu, with the return three days later at the Camp Nou. The two games bring together the two clubs that have dominated this competition over the years, Barça having won 9 times to Madrid’s 8.

Barça first won the trophy in 1983 against Athletic Bilbao and have gone on to repeat that success eight times. Under Rijkaard, they won in 2005 and 2006 against Betis and Espanyol respectively, and Pep Guardiola has won two more. In fact, Barça have always won the title with the Catalan on the bench.

The first Supercup won by Madrid was that of 1988, against Barça, when they won both games 2-0 and 1-2. They retained the title 89 and 90. The last time they won the cup was in 2008 with Schuster on the bench, when they beat Valencia to make it eight titles in all.

Barça has new records in their sights this season. It will be difficult, but not impossible, with six titles to play for. They could equal the Dream Team’s four leagues in a row, become the first team to win two Champions Leagues in a row, and also the first to win the Supercup three times in a row.