Seydou Keita exercised alongside Messi, Mascherano, Alexis Sįnchez and Adriano at the Ciutat Esportiva this evening – the second session of the day. 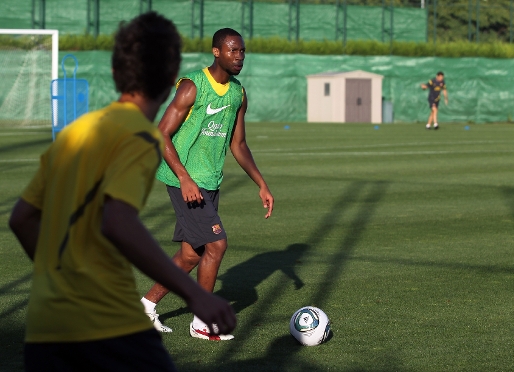 More info
The squad players who are not involved in international games and who were on the US Tour are not due back until Tuesday evening, but just as Maxwell and Puyol trained this morning, so Seydou Keita joined in this evening’s session alongside Messi, Mascherano, Adriano and Alexis Sįnchez.

Second session of the day

The four South Americans, who were involved in the Copa America were all in training this morning - Alexis Sanchez’s first session at the Club- and they were back again this evening as they all work towards regaining full fitness after their break.

Two B team and 4 Youth players

Alongside Keita, Messi, Mascherano, Adriano and Alexis, B team players Masip and Montoya and Youth team players Babunski, Cornejo, Quintilla and Sainz took part in the session, which once again took part under the watchful eyes of Pep Guardiola.