Barça’s Chilean summer signing Alexis Sanchez had his first training session at the Club this morning, alongside Messi, Mascherano and Adriano, whilst Puyol and Maxwell trained apart.

More info
Two weeks ago, Alexis was presented at the Camp Nou and he got the chance to meet the majority of his future team mates, but today he was down to work alongside Messi and Mascherano, who have also just returned from the Copa America, and Adriano who returned last week. 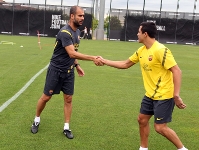 The session began at nine o’clock this morning, after Guardiola had greeted the returning Messi and Mascherano and especially Alexis, with whom he had a brief chat before leaving the three with Lorenzo Buenaventura, who took charge of the first part of the session. Guardiola did keep a close eye on things though and made the occasional comment, whilst Alexis seemed to have settled in quickly with his new South American teammates.

Puyol and Maxwell also trained on Pitch Number One at the Ciutat Esportiva, the captain alongside Juanjo Brau as he worked on his recovery from his knee operation, and Maxwell working with Emili Ricart. 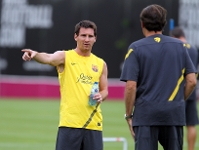 Coaching staff all at work

The rest of the squad returned from the US Tour on Sunday morning and after an intense few days they were given a break until Tuesday afternoon. The coaching staff were back at work this morning however and with Pep Guardiola, Tito Vilanova, Juan Carlos Unzué, Aureli Altimira, trainers, doctors and coaches all at the Ciutat Esportiva, they actually outnumbered the players on hand.