The three games played by Barça in the USA attracted a total of 212,694 people, an impressive figure that reflects the interest in the team in North America. 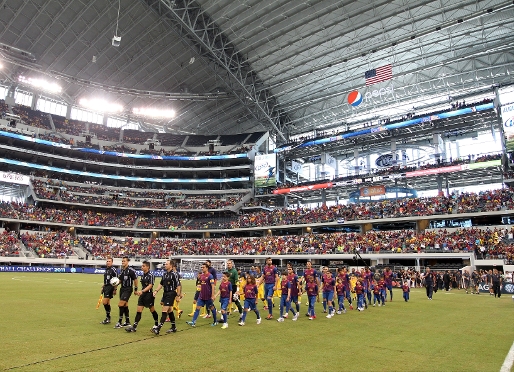 In memory of Jesús Farga

Before the game, a minute’s silence was respected in honour of the late Jesús Farga, who was a member of the FC Barcelona board on different occasions. The players also wore black armbands as a sign of their mourning.
The attendance for Barça’s final game of the tour in Dallas was 60,807, meaning the 63,000 seats were almost all filled, which is especially impressive given the afternoon start (15.00). Barça fans were the majority, although there were also plenty of yellow America shirts to be seen in the stands. As is common in the US, there were plenty of people gathered around the stadium long before kickoff, enjoying the typical pre-march barbecues.

The venue in Arlington (Texas) is not only huge, but also offers all kinds of amenities. The most outstanding features include the huge 1,000 m2 screen, the huge entrance walkways, the plentiful catering facilities and the massive seats.