Welcome to The Cowboys Stadium

Welcome to The Cowboys Stadium

The Barça players were clearly impressed with the Dallas Cowboys Stadium when they trained there on Friday evening ahead of their last game of the US Tour on Saturday night. 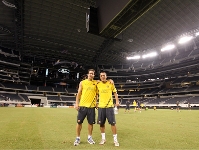 “Everything is bigger in Texas” …or so they say! It certainly seemed to be true of the Dallas Cowboys Stadium where the squad were able to experience firsthand the fantastic venue for Saturday’s game.

You could see on the faces of the players and the staff that they were well impressed with the Stadium as they trooped out onto the pitch to train on Friday. The main point of interest was the retractable roof and the huge video screens hanging from it -50 metres wide and 21 metres high with brilliant high definition images across their 1050 square metre surface. A high tech highlight which cost a stunning 40 million dollars to install. 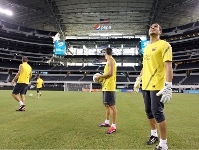 The Stadium is also air conditioned – creating a perfect temperature inside to contrast with the hot and humid weather outside these last few days –and the 1,200 million dollar venue is filled with VIP lounges and private boxes, which together can house more than 10,000 high rollers.

“What an incredible Stadium!” 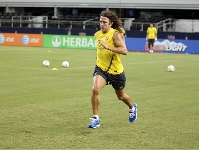 “What an incredible Stadium” was Carles Puyol’s response on Twitter after training, whilst Gerard Piqué agreed and added a photo to his Twitter page. At the end of the training session, Piqué and Victor Valdes both tried to kick the ball up at the massive video screens, something that the keeper finally managed to a round of applause from the 400 invited fans in the ground.