Barça’s visit to Dallas means the rare circumstances of the winners of two of the most important sports titles in the world, the Champions League and the NBA, coinciding in the same city. 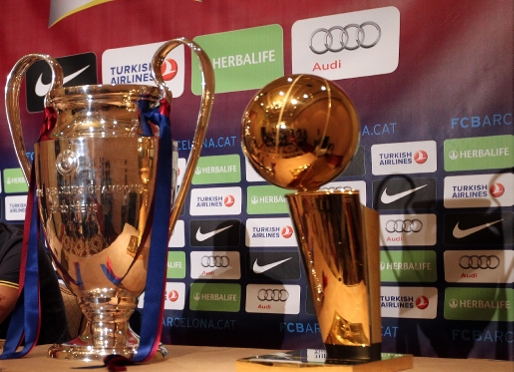 Hotel Ritz-Carlton was the venue for an unusual photo session featuring the Champions League trophy next to that of the National Basketball Association (NBA). The trophy won at Wembley has been brought on tour with Barça and has appeared at several events, and today was joined by the NBA crown.

The club’s Marketing and Commercial Department had contacted the NBA champions, the Dallas Mavericks, to ask whether they could bring the trophy along to the hotel. And that’s what happened. During their pre-match press conference, Guardiola and Iniesta were joined by both trophies. Some of the Barça players even took the opportunity to be pictured holding the trophy first lifted a few months ago by Germany’s Dirk Nowitzki.

Despite the success of winning the biggest trophy in hoops, the Texan city is not in the most optimistic of moods. The potential NBA lockout has cast a shadow over the victory. In fact, while the situation persists, the clubs cannot use the images of their players, who in turn cannot appear in public wearing their club’s shirt or appear in official events, among many other limitations. However, fans were relieved to hear that Dirk Nowitzki, who is currently preparing for the European Championships in Lithuania, has announced that he will not be joining any European club because of the lockout.

Coincidentally, in 2009, Barça were also European champions when they toured the USA, and they visited Los Angeles, where the Lakers had won the NBA title. However, unlike this year, there was no joint photo session.