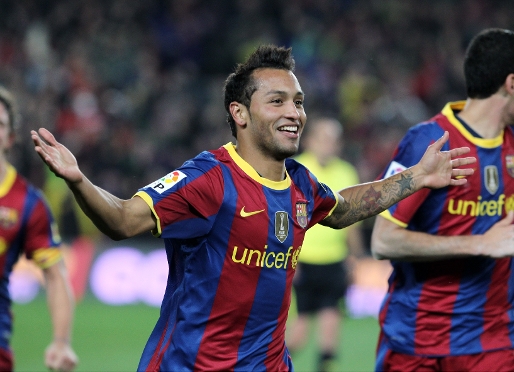 "The moment to sat farewell has arrived. It’s a time of mixed emotions: I naturally feel sad about saying goodbye - or maybe it’s just a “see you later” – to FC Barcelona, to this Club and this city that have given so much to me over the years since I arrived here as a child and which I now have to leave to follow the same dream that brought me here from Tenerife –to be a successful footballer. I’m leaving grateful to all the people who make up this great Club, really, to all of them and especially , of course to my teammates. I’m taking thousands of memories and happy times with me to Lisbon, as well as those tough experiences you all know that I’ve been through which have made me even stronger.

With Barça I made my debut in the Champions League, the Spanish League and the Spanish Cup. I won promotion with the B team and I won all those titles with what many consider to be the best team of all time. I too think that. That’s why I can feel nothing but tremendous pride after defending the Club colours as best I could. Of course, I would have liked to play more minutes, score more goals and set up more for my teammates – generally to have been able to contribute even more, but that wasn’t possible. I leave the Club without any bad feelings and remain excited, conscious that I have always tried to give all I have inside of me for this institution.

I leave Barça and I welcome, with all my heart, to Sporting Clube de Portugal. I know that the slogan of my new club is strength, dedication, commitment and glory and from today onwards I will do all in my power to make these things come true. I am going to where they showed most interest in signing me and where they showed most desire for me and where I know I can contribute most to do great things. I commit myself to doing the maximum possible to return the confidence they have showed in me. I hope I can make my new fans happy. Sporting de Portugal is my next stop and football remains my great passion.