Zubi emphasises the commitment to youth

Zubizarreta emphasises the commitment to youth

Andoni Zubizarreta reinforced the commitment to players at the club. He seems really satisfied with their contribution during the preseason and made the point that there are reserve team players with a presence in the first team.

As happened last season with Thiago and Fontŕs, the first team also has a couple of Barça B players who will have a regular place in the first team, and will give depth to the resources of Pep Guardiola. Although he didn’t want to reveal the names, the director of professional football commented that "some of these players who will form part of the first team are currently playing in the Under-20 World Cup". 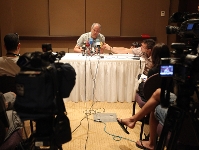 Zubizarreta was pleased with the role of the young players this preseason: "Their presence is important for the team but also for their football development. The last 30 minutes against Manchester we ended up with almost the whole eleven brought through the ranks…..they have the ability to understand how we play and lots of expectation", he added. The downside of this situation, according to the technical director, is the lack of resources that Eusebio Sacristan has at his disposal during Barça B’s preseason.

Many of these players will be playing in the forthcoming Catalonia Cup, immediately after getting back from the tour. Zubizarreta, who recalled that on Monday the 8th players will be called up for their national teams, confirmed that none of the first team will play "unless there is a player we would like to have more minutes on the pitch”.

Sergio Gomez and Gerard Deulofeu are the latest players to be added to the preseason first team squad. Regarding Deulofeu, the technical director called for patience: "If in the case of Thiago, Guardiola said he wanted to go 'piano, piano', then with Deulofeu, we’ll have to go 'Pianissimo, pianissimo', with all the calm in the world. We don’t want anybody to compare him with Messi".

In addition to Deulofeu, in the press conference given in Miami, a lot of other names came up. With regard to Jonathan Soriano, he guaranteed that if he stays he’ll be on a Barça B team contract, on Keirrison he explained that he will train with the B team until they find a team to loan him to, and as for Hleb they are also seeking a loan, but the player is still recovering in Munich from a knee injury. He also spoke of Milito and Abidal; on the Argentine he left the door open for his departure, while they’re working to renew Abidal’s contract: "We want to deal directly with him to try to close it".

Asked about the status of negotiations with Arsenal on the signing of Cesc Fabregas, Zubizarreta didn’t want to say too much: "Let’s see what happens. Talking about it doesn’t help or contribute to help things go better".