"Our obligation is to win"

"There is no worthy excuse, we are Barēa and our obligation is to win"

In the middle of the U.S. tour, assistant manager Tito Vilanova spoke to Barēa TV about what’s going on with the team, and the objectives for the 2011/12 season.

From Miami, Tito Vilanova, the assistant manager, stressed the importance of the pre-season in preparing the team to be in their best shape to start the new season: "We plan the preseason, whichever teams we are playing. We’re aware that Barcelona are always expected to win every game", he said. In addition, Pep Guardiola’s right-hand man recognised that the schedule the team has is "tough, but we’ll do everything possible to win and maintain the level of recent years. There is no worthy excuse, we are Barēa and our obligation is to always win" he concluded.

Technical staff have to evolve too

Asked about the playing style of the team, Villanueva said that the way of playing is not always the same and that the evolution of the team, after four years, was also linked to the evolution of the coaching team. “The fact that it’s now the fourth season we are together, in the same game we have played with different styles. We, as coaches, are also developing and we sometimes see things that help us to evolve" he said. 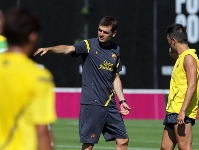 Tito Vilanova praised both Gerard Deulofeu, who has joined the tour after being proclaimed European Champion at U-19 level, and Thiago Alcantara, the only player who is currently scoring goals in the preseason "Deulofeu and Thiago are very good players and with the luck that they are able to cope with the great pressure playing in a team like Barcelona, but we won’t do them any good giving them more protagonism than they deserve, or by adding more pressure. They have to grow alongside the stars that we have, and gradually win their place in the team". In this sense, Villanueva added that "we can’t pretend that they are superstars, in the best Barēa team ever”.

"Jeffren has given us a lot"

The coach also had words for Jeffren, following his signing by Sporting Lisbon: "Jeffren has given us a lot during these years, because he knew really well how we work, but he’s a player who hasn’t had the best of luck, with lots of injuries, and not a lot of continuity, and we believe it’s time he had that" he said.

Before finalizing the interview, there was still time to refer to both Chivas, Barēa’s opponents tonight, and Real Madrid, against whom Barēa will play in the Super Cup. While he said of the Mexican side that they are a team that haven’t allowed us an easy game in any of the 3 previous games we’ve played, about Madrid, Vilanova said: "I don’t see them being very different. Last season they were very good. They’ve brought in new players; we'll wait and see how they get on, and if they make any last-minute signings. From what I've seen pre-season, Madrid’s style of play is the same as last year. They’re a team that is very good on the counter-attack, they’re a very good team.