Adriano, convinced Barça will be at one hundred percent for the Supercup

The Brazilian rejoined training on Tuesday and feels Barça will be in perfect condition for the Spanish Supercup matches with Real Madrid. 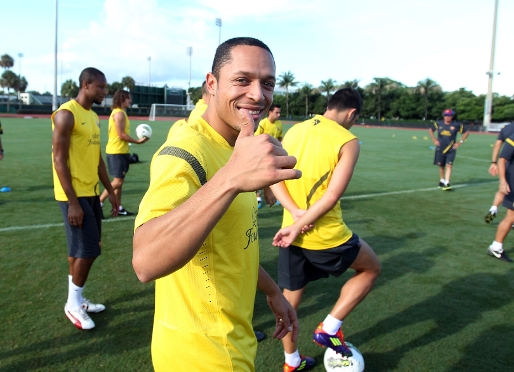 Although he could have returned later due to his participation in the Copa America, Adriano Correia joined the team on its US tour on Monday, and today Tuesday started training. “I have come because I didn’t play any games at the Copa America” he said. “The team has to come first”.

After today’s session at Cobb Stadium, University of Miami, he said he had benefitted from the work he did for his national team, even though he didn’t get picked for any matches. Now he said his greatest desire was “to be at the boss’ command as soon as possible”.

The first major challenge of the season will be the Spanish Supercup. Adriano said “I am really looking forward to starting the season. When the last one ended, we knew this one would start with these matches against Real Madrid. We’ll be at 100 per cent on the 14th.”

He added that the team’s aim this season is to “repeat or even improve on last season’s successes”. He also spoke about how that can be achieved. “Barça is still winning titles and people are still talking. What we have done so far is what we have always done, focus on training and playing football. Our job is to carry on doing our talking on the pitch” he said

Finally Adriano was asked for his views on the Cesc situation. He replied that “I’m sure the issue will be closed soon. That’s a matter for the club. If he does eventually arrive, it will make us very happy.”