“I feel more and more proud of Barēa”

Piqué: “I feel more and more proud of this club”

Following the agreement signed with the Fundación Pies Descalzos, Gerard Piqué gave an exclusive interview to Barēa TV and www.fcbarcelona.cat in which he spoke about the club’s philosophy and the values football can provide.

Gerard Piqué said the agreement between FC Barcelona’s Foundation and the Fundación Pies Descalzos is another step towards Barēa being a caring club beyond the field of play. Piqué feels that solidarity among the players, playing as a team and respecting the rules of the game are a part of Barēa life on and off the pitch.

What does today mean to you?
"It’s a big day. I think we have done something good for children, and we have to feel proud of that." 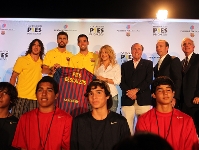 What does collaborating with the Fundación Pies Descalzos mean to you?
"We always try to help children through sport, through football, I think we have to give a hand and now we can through the FC Barcelona Foundation and Fundación Pies Descalzos. Coming here, helping, spending a little time with children, and I’m sure they’re thrilled … and promoting the values of sport a bit, in this case the values of football."

Personally, what has football taught you?
"It has given me a lot. Since a was small, playing with a team and needing to observe a set of values, and knowing that there are rules to the game, and also solidarity with your team mates, being a team … and promoting that. I think sport and football give a lot. " 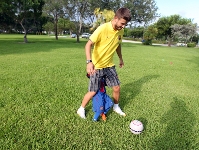 On this tour you have met important people like Bill Gates and Kobe Bryant. All of these meetings show what the club is like right now.
"Yes, thanks to football and the other sports teams, we have won lots of titles. Barēa is more and more important around the world, even here in the United States, where it seems to be all the more difficult, because soccer not so famous but it seems that we are making more and more of an impact and Barēa are the leaders at doing that right now."

With Barēa involved in projects like this, does it make you even more proud of the badge, of the shirt?
"I’ve been a Barēa fan since I was a kid, and I’ve always been proud of my club, but now I feel even prouder, and not just because of what happens on the pitch. Now it’s not because we play well, but because I think we behave perfectly off the pitch, and apart from that, the Club, because of its strength, tries to help."