The secrets of football

The secrets of football

Andrés Iniesta and Sergio Busquets talked to a group of aspiring youngsters in Miami today and tried to explain some of the secrets of becoming a top professional.

More info
Barça are the in team right now and everyone wants to know what it is that makes them tick and produce the fantastic football they have given us over the last few years. If those secrets can be explained by two of the Club’s biggest stars - Andrés Iniesta and Sergio Busquets, who boast five Champions League winners medals between them – it’s going to be a special treat.

That’s what happened in an event organised by Nike this morning at the Soccer Locker shop in Miami. Kids from two local teams - Miami Springs Virginia Gardens and Strike Force, got the chance to hear the two Barça stars after training this morning and there was also time for the usual autograph and photo session. 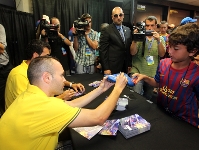 Iniesta reminded the kids of the importance of “always training with interest and desire: “watch carefully what professionals do and try to follow that” as well as stressing the importance of a good education and respect: “in order to get to the heights of playing for a first division team”.

Busquets, who joined the Club aged 16, insisted: “when you are that age you always like playing football, but your studies, passing exams and enjoying yourself are also important”. The midfielder went on: “playing with the best players in the world makes everything easier”, whilst reserving praise for Pep Guardiola: “he’s a great coach who loves to control all the details about our team and our rivals”.

Iniesta: “it’s a privilege to wear this shirt”

Iniesta was asked what Barça, a club he joined when he was just 12, meant to him and he as quick to reply: “for us Barça is our lives. We’ve been here for so long that it’s something we’ve felt since we were little. It’s a privilege to wear this shirt!”.