“The Super Cup? It’s good to start on a winning note”

Keita on the Super Cup: “it’s important to start on a winning note”

Seydou Keita is focussed on working hard in the pre-season, but he was prepared to look ahead a fortnight or so and insisted that for the Spanish Super Cup game against Real Madrid “it’s important to start on a winning note”. 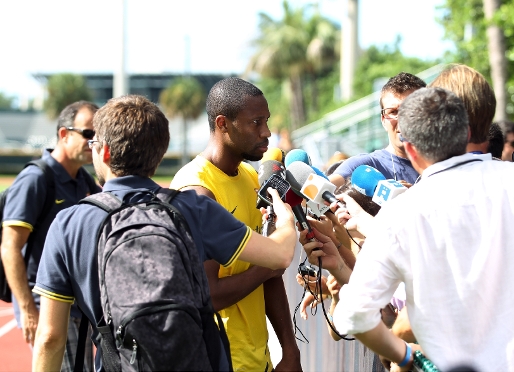 After Monday’s first training session in Miami, Seydou Keita spoke to the media and insisted on the importance of getting the season off to a winning start when the team take on Real Madrid in the final of the Spanish Super Cup in a couple of weeks time.

“Obviously, it’s not a World Cup Final, but a game against Real Madrid is always important, both for the fans and for us players. It’s a final and both teams will want to win. What’s more, it’s the first official competition in the season and it’s always important to start on a winning note”.

The Mali player also expressed himself happy with his pre-season fitness, explaining: “I always like to look after myself in the holidays” and when he was quizzed about the effect of a possible signing of Cesc Fabregas, he insisted that he wasn’t worried about the competition: “it’s normal that there is competition for places in a great team like this with so many good players. Competition is always good in a team and that is what FC Barcelona is about”.

Finally, Keita responded to a question about the possibility that Jeffren could move to Sporting: “he’s a good friend and I’ve spoken with him, but I can’t say anything about it- I’m sure if he does move, you people in the media will soon hear about it”.