Barēa trained at the Cobb Stadium at the University of Miami this morning –their first session in the second stage of their US Tour – as they prepare for Thursday’s game against Chivas de Guadalajara. 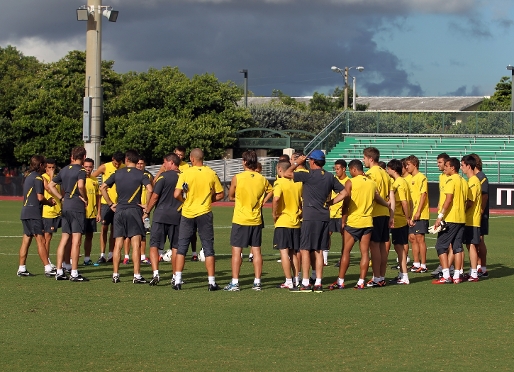 More info
The pre-season training continues for Guardiola’s players, who this morning worked out at the Cobb Stadium, University of Miami, a University famous for its American Football teams.

The session was held in hot and humid conditions and the players were happy for the slight drizzle which fell at one point, as they worked out in front of plenty of fans who’d come to see their heroes close up. 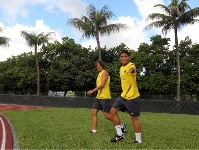 Seven of the players who figured in the defeat to Manchester United, and who have also been putting in most minutes in the pre-season –Iniesta, Villa, Fontąs, Thiago, Keita, Sergio Busquets and Pedro– all worked apart from the rest of the group, as did Carles Puyol once more as he worked on his recovery from his knee operation.

Afellay stays at the hotel 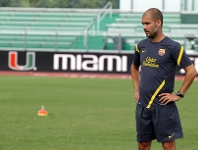 Afellay, who picked up a thigh injury against United and is set to miss the next four or five weeks, stayed at the team hotel to work on his recovery.

Deulofeu and Sergi Gómez join up on Tuesday

From Tuesday, the squad will be strengthened by the presence of Gerard Deulofeu and Sergi Gómez, who will fly in from Rumania where they are involved in the European under-19 final this Monday.