LA Lakers star Kobe Bryant met the BarÁa squad at the team hotel on Sunday, just before the squad left for Miami.

More info
The meeting took place at the Ritz-Carlton in Washington DC in the room where the team had just eaten. Kobe Bryant had just finished a press conference with Carles Puyol and Sergio Busquets as part of a promotional activity for the Club’s sponsor Turkish Airlines, for whom Bryant is also a global ambassador. 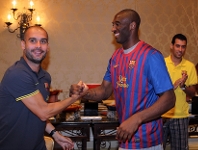 Carles Puyol invited Kobe Bryant, who was wearing a T-shirt with the slogan ‘Mťs que un club’, to come and meet the squad. After chatting with a few of the players, he posed for a photo with the whole group, standing between Seydou Keita and Gerard Piquť. Bryant joked with Piquť about his height and told him he could even be tall enough to play basketball.

Bryant also spoke for a while with Pep Guardiola and then had another photo taken with the technical staff and other members of the Club party. It was an intense moment after Bryant had worn the BarÁa shirt in a charity game and projected the global image of the Club.