Carles Puyol has no problems with his knee and told reporters he is feeling “better”, but after a six month period dogged by injuries, he’s not prepared to put a date on his return. 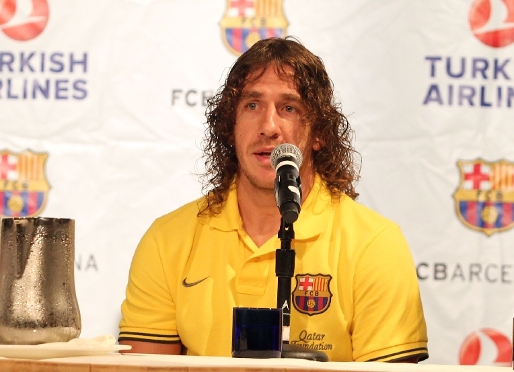 Carles Puyol was operated on in July and has been busy with his recovery since and is yet to train with the rest of the squad: “I’m feeling better every day, but the recovery is slow. Everything is going little by little. As Doctor Cugat(who operated on him) put it, I’m not in charge here, it’s the knee that is”.

“I’ve got no problems with my knee any more”

The captain insisted: “I’ve got no problems with my knee any more”, but refused to be drawn on a date for his reappearance, although the first official games of the season are set for 14th and 17th August: “I don’t know how long I’ll be before I’m back, but I want it to be as soon as possible, when I am fully 100%. Everybody who knows me will understand that I am really keen to get back. I’ve been a long time with this injury –six and a half months. I am really keen to get back”.

Puyol was accompanied by Carles Busquets who was questioned about the role of Barça’s leading scorer in this pre-season –Thiago: “he’s a quality player, but he is still young and shouldn’t be pressured any more. I am sure that he will be an important player for the team”.