Football and entertainment with Kobe Bryant and Guardiola

Football and entertainment with Kobe Bryant and Pep Guardiola

More info
One of the joys of charity games is often seeing things that would never happen in a normal game, such as both teams wearing Barēa shirts, an NBA star on the pitch or the return of a football legend –Pep Guardiola. Kobe Bryant wore the number 24 shirt and even kept his sunglasses on throughout the game. In his defence, his size is maybe not really suited to football, though he did score a goal….unfortunately it was an own goal.

Pep Guardiola back in number 4 shirt 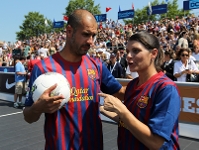 Fortunately for the LA Lakers star, he was playing alongside a rather more accomplished player – Pep Guardiola. The Barēa boss, who retired as a player in 2006, again pulled on the number 4 shirt and was one of the players who the fans most cheered on his appearance. Pep played his familiar role in the centre of the pitch and set up the first and scored his team’s second goal.

Fellow Barēa man Manel Estiarte was on Guardiola’s team, whilst the other side, wearing the team’s back second strip, had Andoni Zubizarreta in goal and the Club’s Sporting Director of Professional Football showed he still retained his goalkeeping skills with two good stops from Kobe Bryant. 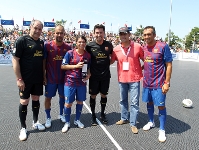 The match – the Mia Hamm & Nomar Gardaparra celebrity soccer challenge -was held to raise funds for the many charity projects that the Barēa ambassador organises. This is the fourth edition of the challenge and as well as Kobe Bryant, there was a host of other well known faces taking part, including reporters, basketball stars and members of the US Women’s Football team, who were recently runners up in the World Cup in Germany.

At the end of the game, Club President Sandro Rosell came onto the pitch and in front of the 1,500 spectators at the match, presented Mia Hamm with a small present in recognition of the social work she has been doing. Once again, football served as a perfect excuse for helping people and once again, Barēa didn’t lose – the game ended 6-6!