Barēa players meet up with US fans

Barēa players meet up with US fans

The Barēa players were greeted by thousands of fans at Friday evening’s training, who enjoyed seeing the stars work out up close and were then treated to a long session of autograph signing.

More info
After nearly half an hour signing autographs for the fans after the training session proper had finished, the players left the FedEx pitch to chants of “The best team in the world”, as the US supporters and the players shared some quality time together at the gigantic Washington stadium. 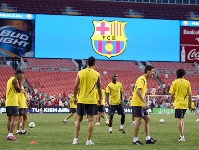 Nearly 5,000 people watched United and then Barēa train ahead of Saturday’s game, with the Barēa fans certainly outnumbering the United followers and plenty of Barēa flags and scarves in the crowd.

The Barēa players put in a physically taxing session, which was also very spectacular for the fans, with the ball control exercises moving from one side of the pitch to the other to give them a clearer view and the ball always present in every exercise. 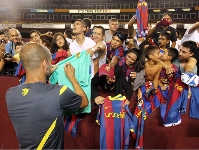 As with the morning session, Gerard Piqué and Maxwell worked apart after their muscle strains, as did Carles Puyol, who continued his recovery from his knee operation. Those three were the first to leave the session and begin signing autographs for the fans and despite the humid conditions and the effort they had just put into training, the rest of the squad soon joined them, as did Pep Guardiola – the last man off the pitch - for autographs and photos.