At The White House

A delegation from FC Barcelona. Led by Club President Sandro Rosell went to The White House this Friday on a private visit of one of the States’ most iconic buildings.

More info
After a morning training session, the whole squad and the Club directors accompanying the Tour were taken up Pennsylvania Avenue to The White House for a private visit. They were met at the U.S. President’s residence by Michael Strautmanis, who is Deputy Assistant to President Obama and Counselor for Strategic Engagement to the Senior Advisor. 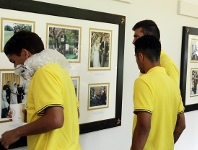 The Club delegation was made up of 59 people and headed by President Sandro Rosell who was accompanied by vice presidents Josep Maria Bartomeu and Jordi Cardoner; Club directors Josep Ramon Vidal Abarca and Didac Lee, Club Director General Antoni Rossich, Andoni Zubizarreta, Josep Guardiola, the rest of the technical staff on the Tour and the full playing squad.

After passing through the security controls at The Executive Mansion, the party was split into two groups for their tour of the building, where they saw a number of areas, such as the reception rooms and the corridors leading to the conference rooms. The fascinating stories surrounding the building and some of its past Presidents were also explained.

The group also visited the Portrait Room of past Presidents where all the Presidents painted are looking straight at the viewer, except for John Kennedy, whose portrait was finished after his death and for that reason the painter was unable to reproduce his face.

The group finished the trip with a photograph on the South Lawn of the White House.