First training session with the ball in USA

Guardiola and his team used the ball in training for the first time since arriving in the United States. The venue was the emblematic Robert Fitzgerald Kennedy Memorial Stadium.

More info
Barça will be in America for ten days, and after working out in the gym and then having the Thursday evening session cancelled on Thursday, today they finally trained with the ball. 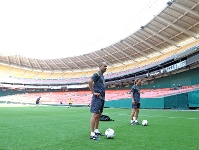 The venue has been used in the past for a host of different sports events, including matches at the 1994 World Cup. It was built with baseball in mind, which is why it is slightly more oval shaped than a regular football stadium. Its previous tenants include the NFL’s Washington Redskins, who were there for 36 years, and baseball’s Washington Senators (now Texas Rangers), while it is currently home to Major League Soccer franchise DC United. 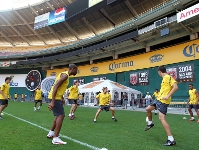 The positive news today was the return of Xavi Hernández to active duty. Until now, the midfielder has been working out in isolation, and his colleagues gave him a hearty round of applause as he came onto the field today.

In stifling temperatures of 36 degrees, and humidity of 45%, Puyol, Piqué and Maxwell all trained on their own. Puyol is still recovering from a knee injury, while Piqué and Maxwell have taken minor knocks, Piqué to the calf and Maxwell to the abdomen.