Alexis Sanchez: "I learned to play football in the street"

Alexis Sanchez: "I learned to play football in the street"

The new Barça player reviewed his football career and gave his first impressions after having signed for FC Barcelona on the program "Welcome, Alexis', which will be broadcast tonight at 23h on Barça TV.

Alexis, despite your youth, you already have an extensive curriculum, and you’ve played in both South America and Europe, although you started in the Chilean team Cobreloa. When and how did you start playing football?
"From an early age I liked football and I started with my friends in the neighbourhood, before we even had grass pitches: they were pure dirt pitches, and we got used to playing on them."

What do you remember about your first games with Cobreloa, where you debuted as a player?
"I played with older players, all my life I grew up playing with older kids. Sometimes I played up front, although I was very young, and they always kicked me. They kicked me because they couldn’t stop me and it motivated me even more." 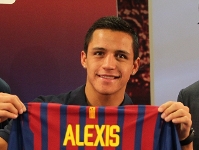 What time do you remember as one of the happiest of your childhood?
"I think it’s when I told my family that I wanted to be a professional football player, and I ended up realising that dream."

Where do you think you’ve learned most as a player?
"I think I've learned most playing in the street and the neighbourhood games, as in South America a lot of football is played like that. Other than that, I think that both championships and trips also teach you a lot".

Why did you start playing football and decide this was the sport for you?
"Every time I started a game of football I forgot all my problems and I enjoyed myself with my teammates on the pitch".

At 22, you can already say you've played for five different clubs: Cobreloa, Colo-Colo, River Plate and, in Europe, Udinese, and now FC Barcelona. How would you describe your evolution in the world of football?
"I always said: "I have to take it step by step" and, until today, it’s been the case. I never move directly from a small team to a bigger one. I always had to fight for my place in the side and finally get to go to a great team as I have done now, to Barcelona." 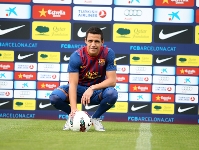 How do you compare football now that you're a professional player, to when you played as a child?
"I always think of football as a game, but never forgetting that it entails responsibility. I love to take more responsibility, although I’m still the same player as when I was five or ten years old, I’m still enjoying myself on the pitch".

Having always played in South America, you got the offer to come to Europe in 2007. Despite your youth, you accepted the challenge. It must have been a great challenge for you...
"I like to dare myself to do difficult things, and I decided to come here because I thought that if everyone thought that it was so difficult, I wanted to fight so that it would become easier for me and I might enjoy myself. Thanks to this I had a good championship."

In fact, you have had good championships and this has propelled you towards big clubs. What do you think has been the key to your professional success?
"I think I always had faith that I would get to a big club, be one of the best and win championships with whichever club I may be at".

Just lately you’ve been at the Copa America, with Chile and Marcelo Bielsa. What has he taught you about the world of football?
"I think I learned a lot from the "Profe", and I think he left his mark both in Chile and the rest of the world. I learned a lot with him, I would have never thought I’d learn as much as I did".

The day of your presentation, in the press conference, you said you wanted to learn from your new teammates. Do you often do that?
"I always try to learn from all my teammates. If I see a good move and I like it, and it’s another player who does it, I practice it until I get it right."

On that same day you met Pep Guardiola. What do you think of him?
"I haven’t spoken much with him, but I think he wants to win, and win everything. Not only that, but he wants to do it playing good football, which is how Barça plays."

Here you’ll be wearing the number 9 shirt, is it the position where you are most comfortable?
"I’ve played in all three forward positions, both in the middle and on the left and right. I can adapt to all three positions. Messi wears number 10 and plays as a striker, just like a number 9. Here, it doesn’t matter the number you wear or the position you play in, because in the end everybody changes position all the time."

It’s been said that you can bring things that the team hasn’t had up to now. How do you feel after having signed for FC Barcelona?
"If they need me, I’ll give them everything I can. I feel well supported and with a responsibility at the same time, because I want to leave the name of Chile well positioned."

How would you define Alexis Sanchez away from the football pitch?
"I’m shy and don’t like to go out a lot, I prefer to be at home, watch movies ... but, above all, I want to come onto the pitch and receive the ball".