"Barça is the most creative team in the world"

Heynckes: "Barça is the most creative team in the world"

Jupp Heynckes, Bayern Munich Manager, has only praise for Josep Guardiola’s team, both for the success of the current European Champions, and for the way they play. 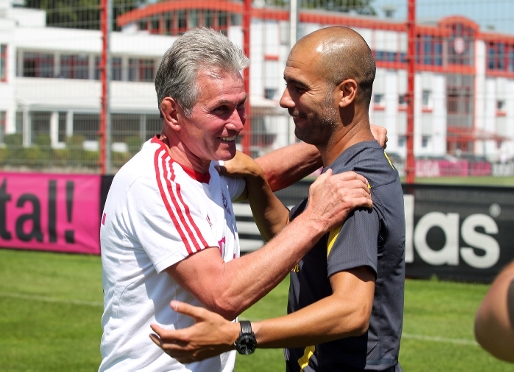 "I know Spanish football, and Barça’s game, pretty well. Everyone knows they’re the current Champions League holders, but we must also remember that they’re the most creative team in the world". With these words of praise, the German coach, who takes over from Van Gaal as manager of Bayern Munich this season, admitted his admiration for Guardiola’s players.

At the press conference after the other semi-final of the Audi Cup, Heynckes also referred to the work of the Barça Academy: "They have lots of players who have grown up together at the club, and this means they understood each other really well on the pitch, but also, and very importantly, off the pitch".

Players missing from the Final

Despite the absence of important players in the Barça first team, the coach from Mönchengladbach believes that the Audi Cup Final "will be a very interesting game....it’s true that Barça without Messi is a different team, but players like Iniesta, Xavi, or Busquets are extraordinary players". One of the Bayern doubtfuls is Arjen Robben, who had to come off in the semifinal against AC Milan due to a heavy kick on his leg. Ribery is a non-starter, as he has an ankle injury.