“Whoever we play, we’re a recognisable team”

Guardiola: “Whoever we play, we’re a recognisable team”

Josep Guardiola is satisfied that despite using so many reserve players, Barça stayed faithful to their style. “We came to play football and we did it”, he said. 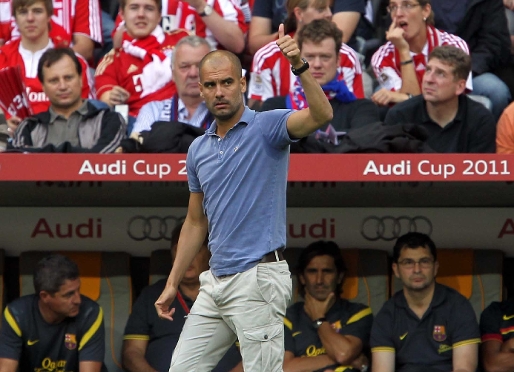 On Wednesday, the squad is due to train at 11.00 at the Bayern Munich training ground.

Meanwhile, Thiago was named man of the match on Tuesday evening.
FC Barcelona qualified for the final of the Audi Cup after beating Internacional on penalties. The manager was pleased with the way things had gone, and said “I’m proud of how we played with so many reserve players. We came to play football and we did it.”

Guardiola then explained that “I feel trust in all my players because they are all good. I just have to put them in the right places to play. The younger ones must have a bit of patience and show what they can do, which is a lot.” He singled out Thiago as “a different player” and said Jonathan Dos Santos “always does very well”.

Busquets at centre back

On playing Sergio Busquets at centre back, the coach said he did so because he’s a player “that makes the team reliable” and explained that he is missing players in that position. “I haven’t got Mascherano, Milito, Puyol, Piqué, Muniesa, Bartra or Sergi Gómez” he said.

Asked what condition Barça are in to play the Supercup with Real Madrid, all the boss would say was “it’s important to do well with whatever players are available. This competition tends to come just in the nick of time”.

On new signing Alexis Sánchez, Guardiola said “he was a player we all wanted. The fundamental reason he has come is because he wanted to, because of the player’s own desire, and because Barça has negotiated very well.”

As for the idea of coming back to the Allianz Arena to play in the Champions League final, he said “it’s too much of a fantasy to think about that. There are lots of good teams who want to and can play in that final. Simple desire is not enough.”

David Villa also spoke about how well some of the youth players had performed. Here are some of his statements: 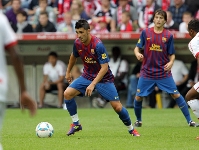 “It is wonderful to watch some of the youth players. They are the result of a lot of hard work with the youth system.”

“Internacional is a good team with a strong history. We are just starting our season and we have other objectives than just winning.”

“Set plays are an important part of our game and they gave us a good result in the first goal.”

“When the competitions start we’ll be ready in every way.”