Alexis Sánchez has had a busy first day at FC Barcelona. The Chilean signed his contract this morning and in the afternoon got the chance to meet his new colleagues. 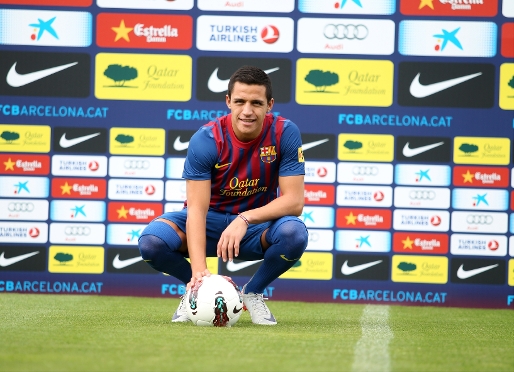 More info
Alexis got his first chance to try on the Barcelona shirt at the Ciutat Esportiva Joan Gamper, given that the Camp Nou turf is being relaid. So it was at the training ground where he posed for the traditional photo session for the media.

On a busy morning, he had also taken his medical tests and signed his contract, but those routine events were followed by a lively afternoon with no end of introductions.

At six in the evening Alexis appeared on pitch number one at the Ciutat Esportiva Joan Gamper now wearing the Barça kit. TV cameras and photographers crowded around to get the first pictures of Barcelona’s summer signing. Alexis was all smiles as he played around with the ball and made sure of kissing the badge on his shirt. 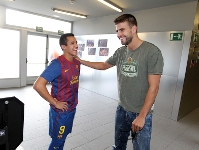 The Chilean first experience of the Ciutat Esportiva was especially unforgettable because he crossed paths with the people that will be his future team mates. He was able to share a dressing room for the first time with the many illustrious players that make up the FCB first team squad, who welcomed him with open arms. Alexis also had a meeting with Pep Guardiola, who also made sure of welcoming his new player.

The player will not be expected to join the first team until August 8, the same day as the other players that played at the Copa America, but he wanted to get his first proper feel of the club, and stayed to watch the first 15 minutes of the training session.

At the end of his first day as a Barça player, Alexis Sánchez returned to the Camp Nou to be interviewed by Barça.