Zubi: “He brings things to the squad that we don’t have”

Andoni Zubizarreta: “Alexis brings things to the squad that we don’t have”

The sports director for professional football, Andoni Zubizarreta, has spoken about the versatility of FC Barcelona’s latest signing, Alexis Sánchez, who he believes can play in several positions.

In his first press conference as an FC Barcelona player, Alexis Sánchez was joined by Josep Maria Bartomeu, the director responsible for the football area, and by Andoni Zubizarreta. Both of these gentlemen played an active role in signing the Chilean, and spoke about what a useful acquisition he is likely to be.

26 million plus 11.5 in variable bonuses

The man charged with introducing Alexis Sánchez to the media was Josep Maria Bartomeu. In front of a packed Sala París, Bartomeu said that Alexis “was an express request from the technical secretary” and commented that the agreement settled on a fixed transfer fee of “26 million plus 11.5 in variable bonuses”. He also explained that the Chilean “turned down better financial offers” and therefore “collaborated in being able to come to Barça”. 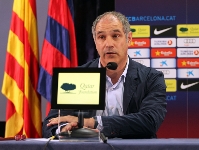 Andoni Zubizarreta described the club’s latest signing as “versatile and able to play in several positions … he will give us an extra edge and some aggression” as well as “offering us more options in attack”. Zubi also believes that “Alexis brings things to the squad that we don’t have right now”.

During the presentation he also said that part of deal with Udinese to bring Alexis Sánchez to Catalonia involves the participation of the Italian outfit in at least one edition of the Joan Gamper Trophy over the next three years, as well as one friendly match between the two clubs.