The Chilean striker has been handed his number 9 shirt and was presented on Monday as a new member of the first team.

More info
“Guardiola phoned me and put his trust in me” said Alexis, explaining one of the reasons that he chose to come to Barcelona. He also said that his father told him one day how much he would like to see his son playing for Barēa and that this also helped him to reach his decision.

Best team in the world

The Chilean admitted that he is very happy to have become a Barcelona player, and spoke about how proud he is to form part of what he calls the best team in the world. Alexis Sįnchez, whose number 9 shirt will carry the name ‘Alexis’ on the back, said that his main priority is to “integrate with the group and learn from Xavi, Messi and the best players” and to make sure he can “make a good impression” both on and off the pitch. He also recognised that friendship among the squad is something he values very highly.

He also said that one of his childhood idols was Ronaldo Luiz Nazario da Lima. Alexis always found the Brazilian, who also played fo 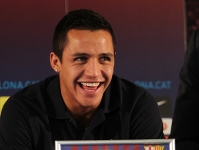 r Barēa, to be a ‘phenomenon’ and modelled many things on his hero.

Alexis, who was joined by several members of the Chilean media on the day of his presentation, and admitted that it won’t be easy to earn a regular place in the first eleven because there are so many good players in the squad.

Minutes before his official presentation, Alexis Sįnchez signed a contract that binds him to Barēa for the next five years. The get-out clause is worth 100 million euros and he will be joining the rest of the team as soon as Josep Guardiola considers it right. The Chilean said that on Monday afternoon he has been cited for a meeting with his new coach to talk about his future role in the team.