The champions’ airplane goes on tour

The champions’ airplane goes on tour

FC Barcelona will travel to the United States aboard the Turkish Airlines plane that brought them back from London with the Champions League trophy. Pictures of the players will be stamped on the outside of the Boeing 777. 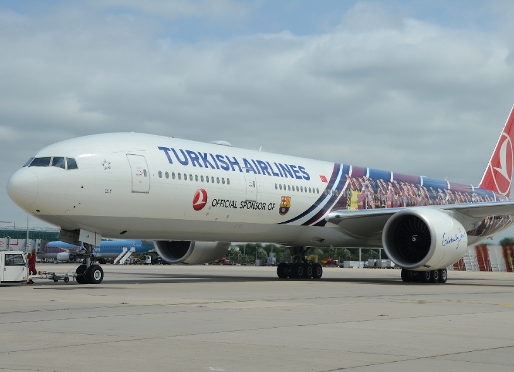 FC Barcelona are off to the USA this week, and will be appearing in Washington, Miami and Dallas. The team will be travelling to the States aboard a Boeing 777 provided by their official sponsor, Turkish Airlines.

From Munich to Washington 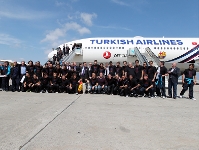 The team is off to Munich on Tuesday to appear in the two-day Audi Cup. On Thursday, they’ll be heading straight from Germany to North America on board a Turkish Airlines aeroplane that the team is already familiar with. It was this same aircraft that brought them back to Barcelona on May 29 after winning the Champions League at Wembley.

Barça will also be using the plane to return to Barcelona after the last game of their US tour in Dallas on August 6.

There will be no missing FC Barcelona and Turkish Airlines’ Boeing 777 because it will be decorated with pictures of first team players. The plane can carry 365 passengers and has maximum autonomy of 14,685 kilometres.

The 777-300ER is also the largest twin engine aeroplane in the world and is 19% lighter than its nearest competitor, which greatly reduces its fuel requirements.