The Chilean touched down at El Prat airport at 20.15 and was then photographed next to the Barça crest outside the Camp Nou offices, and said that he reckons Barça is a right place to be to win titles.

More info
It has been some wait, but now he’s here. Alexis Sánchez, the first Barça signing of the 2010/11 season has had a look at his new stadium after arriving in the Catalan capital on Sunday. He went straight to be pictured outside the Camp Nou offices and spoke to Barça TV and www.fcbarcelona.cat. “Me and my family thought Barça would be a good club for winning titles and being happy. It has been my dream since I was a child”, he said. 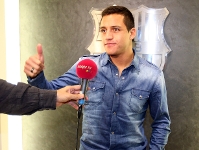 The Chilean will wear the number 9 shirt, and on his reception both at the airport and the Camp Nou, he said “I am very happy, I didn’t expect this … This is the biggest club in the world. I hope to do the best I can.” Alexis said one of the reasons he wanted to come to Barça was “the way they play, it’s the best in the world at the moment”.

The striker will take a medical examination on Monday. After that he will be presented and will don a Barça shirt for the very first time.