The Navarran, who is back to coach the first team goalkeepers after spending a year in Soria says “I feel privileged to be able to come back home”, where he senses the squad to be as ambitious as ever.

This is Juan Carlos Unzué’s second period of coaching at Barça. He first started in 2003 under Frank Rijkaard at continued in the job after the arrival of Pep Guardiola. After a year in Soria, where Numancia came tenth in the second division, he has decided to come home. He spoke today to Barça TV and www.fcbarcelona.cat about his return.

How have the first few days of work gone? 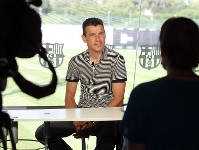 “It’s like coming home. In some ways it’s like nothing has changed. The group is the same; the connection between the players is the same. Personally, this year has been thrilling. Nobody can take the experience of Soria away from me. I was anxious to give it a try, and I’m happy I made that decision and also happy to have decided to come back home”.

Why did you decide to leave Soria and come back to Barcelona?
“Last year I was anxious to manage a team but for some months I was anxious to be with my family again. As simple as that. I didn’t think the distance would matter that much. When I decided I’d like to return to Barcelona the opportunity arose of returning to this great club and I feel privileged”.

And if a new coaching job had appeared?
“My priority was to stay in Barcelona. I am where I want to be. Those that know me know I have experience and knowledge to offer that will help the club maintain its status and the capacity that it has shown in recent years”.

What are your conclusions from your time at Numancia?
“Mainly personal. It was a situation where I was pressed to the limit, under a lot of stress, something I’ve never experienced before. It helped me grow. Being an assistant coach is nothing like being the head coach. Now I appreciate what coaches do even more. But I’d also try it again, because I feel like a coach”.

Is playing like Barça away from Camp Nou very difficult?
“Normally it’s difficult because other clubs have not acquired the same habits. It is the defenders that notice it most, not when they’re defending but when they’re attacking. This year I have learned that footballers have many fears. They had played a different way for many years, but I am pleased that over the season the players were willing to learn and managed it”.

Carles Busquets is going back to the B after doing a grand job.
“Busi did a fantastic job last season. I know what he was doing because Pep, Víctor and Pinto have spoken to me about it. But I think we need to realise who the real protagonists are here, and in this case it’s the goalkeepers. Whether it’s Juan Carlos Unzué or Carles Busquets who’s working with them, it’s the men on the pitch who matter most. Both are very high quality players”.

Did we see the best yet of Valdés last season?
“I have seen an improvement. Especially when creating plays. A lot of opponents have put him under pressure this season, but both he and Pinto have had the upper hand and have excelled with their decision making”.

Has Valdés reached his peak?
“There is always room for improvement because he has a strong mentality. Whenever he dons the gloves he gets the feeling that he can improve. His ambition hasn’t stabilised, quite the opposite. I think Valdés has enjoyed these last few years. I have seen him enjoying himself in matches, and that also forms part of the process”.

Pinto has played more than ever. 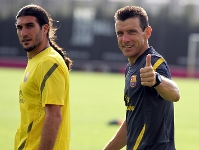 “Pinto has shown since the start that he can play here. And it’s not easy for him because he doesn’t get many matches and everybody is looking at him. So he usually has less margin for error. Given the circumstances he has played under, he has been top class. It would be hard to find another keeper who accepts his role as much as Pinto and who has performed so well”.

Do you think the squad is still hungry for titles?
“Yes. I’d be surprised if that wasn’t the case. Xavi, Puyol, Iniesta, Valdés and company have never lost that ambition because they have always been aware of where they came from. It is not easy for a team to play at such a level for so long and the feeling I get is that this can continue. I have no doubt that we’ll be fighting for every title once again”.

The team can win six titles again.
“Now we have the experience. But sometimes to win the same thing you can’t just do the same thing, you need to do a little more. One thing we did well when we won six titles was to take things a day at a time. We tried to play every game at the best of our ability. And with such top class players, it is only normal to go into the important months of April and May with every title to play for, and the rest depends on many circumstances”.