Bojan: “I want to be happy about football again”

Bojan: “I want to be happy about football again”

The striker has given a farewell press conference at which he made it clear he is going to Roma in search of happiness, saying “I am 20 years old and I want to continue demonstrating what I couldn’t here”. 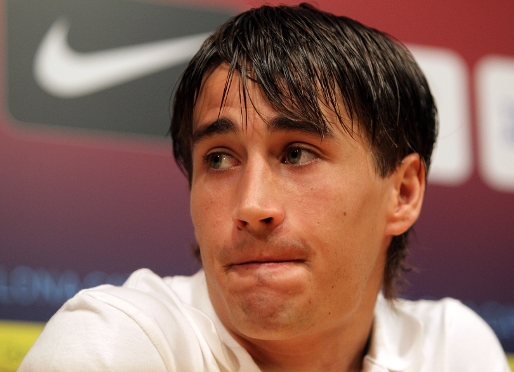 There were plenty of emotions at the Ciutat Esportiva for Bojan Krkic’s departure speech. He is leaving Barēa for Roma and said, “I want to be happy about football again. I am 20 years old and I want to continue demonstrating what I couldn’t here … my dream was to triumph at Barēa, but I am happy that another club has given me the chance to triumph”.

With respect to his new contract, Bojan is pleased about the clause for Barēa to buy him back in two year’s time. “I am leaving one great club for another and both parties have an interest. So, I’m happy about that”.

With tears in his eyes, he said that this is “the most bittersweet moment in many years at the club” and was grateful to Puyol and Xavi for being there at Sant Joan Despķ (along with director Jordi Mestre and sports director Andoni Zubizarreta). “I have been here twelve years, eleven at a top level. Especially this last year there has been a lack of confidence in me, I didn’t get much continuity, and that hurts but I also aware of things and consider myself privileged to have been part of such a magnificent team. These were four great years. I take away the positive aspects”, he said.

Some of his fondest memories have been “living together with colleagues, the cup final, my debut for Barēa, my debut at the Camp Nou and my first goal,” while his less pleasant memories include “the many times they haven’t been fair with me and that’s one of the reasons why I have decided to leave. One of the last resorts was not getting to play in the final at Wembley.” But Bojan insisted that “I don’t want any controversy with Guardiola, I don’t want to speak badly about him. As a Barēa member I consider him to be the best possible coach, although personally there are many things I don’t agree with”.

His final words were for the fans. “I want to thank all the people who have treated me so well for nine years here, all the youth players and the first team players, the media, the fans … without them I couldn’t have continued.” And to end: “I will always support Barēa, I am sad to be leaving the club, but I’m very happy to be going to Roma, they have demonstrated a lot to me this last month. I hope to bring them a lot of joy. Long live Barēa and long live Roma!”