How the Chilean wonder boy plays

How the Chilean wonder boy plays

Known as the 'boy wonder', Alexis Sanchez (22) is right-winger capable of playing in any of the three attacking positions. Fast and very skilful, the Chilean also stands out for his tactical discipline.

dav
Alexis Sánchez (19-12-1988, Tocopilla, Chile) took his first steps in football at Cobreloa Chile, the team where he made his debut at a professional level in both the Chilean League and the Copa Libertadores. His good performances carried him into the lower categories of then national team and attracted the attention of several clubs, but finally the Italian club Udinese signed him in the summer of 2006. 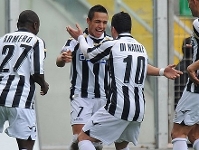 The Italian club decided to loan him out to Colo Colo Chile, and then to River Plate in Argentina, which helped him to mature and prepared him for Serie A. The 2008/09 season was his first in the colors of Udinese and since then, over the last three seasons, he’s played a total of 95 games. It was last season, however, when he improved his goal-scoring figures, becoming a prolific scorer (12 goals). Designated as the player of the season in Serie A by the 'Gazzetta dello Sport', Alexis Sanchez was one of the main reasons why Udinese qualified for the Champions League next season.

Despite his youth, Alexis Sanchez also has a lot of international experience. He’s played in European competitions and also in the last World Cup in South Africa. 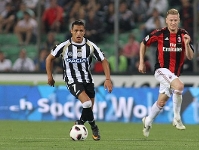 The 'wonder boy' has a lot of virtues. Particularly remarkable for his speed and skill with the ball at his feet. He’s an explosive player, unpredictable, takes players on, and can shoot from distance, and his crosses are pinpoint. His versatility, however, means he can occupy any of three positions in attack. His experience with Marcelo Bielsa’s Chile has helped him to become a player tactically very disciplined and with the clear objective of recovering the ball when the team has to defend.