Guardiola: “The priority is a striker”

Guardiola: “The priority is a striker”

Pep Guardiola has admitted that the club has its eye on Alexis Sánchez (Udinese) and Cesc Fŕbregas (Arsenal), although he would rather sign a striker than a midfielder. He also said that the squad is as keen ever to produce good football.

In his first press conference of the 2011/12 season, Pep Guardiola has spoken about the confection of his squad. “The priority is a striker, as we have more players in midfield than up front.” The only proper names that were mentioned were those of Alexis Sánchez and Cesc Fŕbregas, two players Guardiola would welcome. “As Andoni [Zubizarreta] has told me, there is enough money to sign them both, and we’ll be trying to do that”. 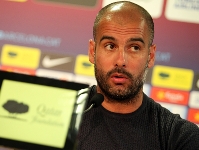 Guardiola defined the Chilean as “very young, he can play in all three attacking positions, he is an intense defender, he plays vertically, can change the game, and they tell me he’s a really nice guy”. Whatever happens to Bojan, who wants to go somewhere he can play more, it is in attack where the team is most in need. “There are midfielders in the B team that can help us out. Everything costs money, but it’s a striker we need”.

On Cesc, he said “last year we wanted him, but Arsenal didn’t put him on the market. This year they were willing to negotiate and we’ll be trying to reach an agreement. We’ll keep trying until the end”. Guardiola reckons he would be perfectly compatible with Thiago. “Midfield is the essence of our team and there are never too many good players here. I have never thought of it as being one or the other. Thiago has a promising future and we will try to give him minutes to show us what he can do and Cesc can help with many tactical variants. The season will be a long one”.

Rounding off the squad 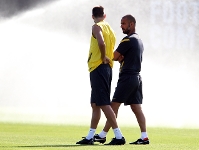 On recent movements between the player and the Club, he observed that “Cesc has to do what Arsenal tells him. I’m told he has not gone on tour because he’s got injury worries and he’ll play when he’s fit. Everything we have done has been about getting permission from Arsenal … When you look at the fixture list, it’s frightening how many matches we have. We need a slightly bigger squad, we have to round it off. The Club has worked excellently over all this time”.

In this regard, he also said that Puyol and Abidal were “the best signings”. He is delighted that his captain is getting fit again, while on the South Americans he said “they now need to get some rest and they’ll be back when they can. I want them to get two or three extra weeks holiday, and the latest they’ll be back is the 8th”.

Same demands as ever

Guardiola also spoke about the return to work. “The first year is not the same as the fourth. The motivations are different, we’re a bit calmer but I am as enthusiastic as ever about my work and they are as keen as ever to play good football … There is always room for improvement, there are always things we can do better. If you don’t think that, there would be no interest”.