Argentine star Diego Armando Maradona, considered the best player in the world in his time, left Barça to join Napoli. He didn’t have the best of times in Barcelona, but became a legend in Napoli. 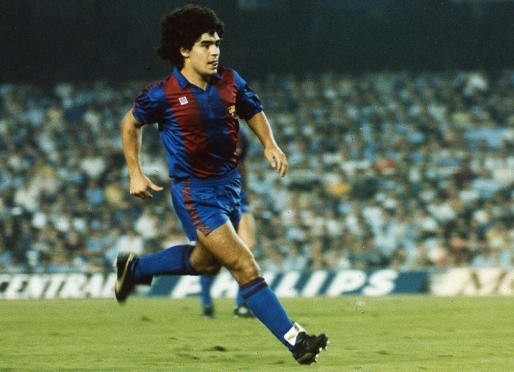 Barça fans were thrilled in 1982, when Maradona arrived at the club, amongst great expectations that unfortunately were not met. 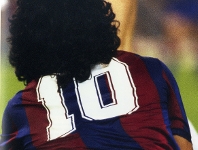 Wearing the Barça shirt, Maradona showed a lot of his magic, but was invariably marked out of games, which meant he only got to really impress on limited occasions. One of those was his goal against Red Star in the 1982/83 Cup Winners Cups, and another was at the Santiago Bernabéu in that season’s League Cup, which even the Madrid fans were moved to applaud.

Then Maradona went down with hepatitis and was told to rest for a few months. He returned to the team just when Udo Lattek was departing, and being replaced by César Luis Menotti, who saved the season with two wins against the eternal rival, Real Madrid, in the Copa del Rey and League Cup finals.

In his second season at Barça (1983/84), Maradona suffered a serious injury following that horrendous tackle by Athletic Bilbao’s Andoni Goikoetxea, causing him to fracture his ankle. He did not reappear until the end of the season, by which time Barça were already out of the title chase. He also had to miss the notorious Copa del Rey final with Athletic Bilbao that was blighted by several fights between the players.

Maradona decided the best thing would be to go, and he signed for Napoli in Italy, where he became a veritable star and led the team to two Serie A championships, a Coppa and a UEFA Cup. A modest Italian club had suddenly emerged as one of the finest teams in the world, overcoming such giants as Inter, AC Milan and Juventus. And that was largely thanks to the amazing Maradona, who also won the 1986 World Cup with Argentina. But in 1991, the Calcio suspended him for fifteen months due to drug-related issues. He never played for Napoli again, and in 1992 he was sold to Sevilla.