Valdťs keen to get started

Valdťs keen to get started

BarÁa keeper Victor Valdťs is ďexcitedĒ about the new season, which he reckons is going to be ďfull of new challengesĒ. Speaking at the launch of his new webpage, the keeper also commented on the current situation at the Club.

With under a week to go before BarÁa begin their 2011-12 pre-season, Victor Valdťs marked the launch of his personal website ( www.victorvaldes1.com ) by stressing: “I’m really keen to get the season under way and excited about the new challenges we’ll be facing as we fight to retain all our titles”. 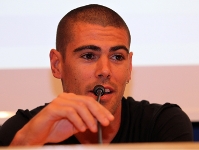 With the team’s first official games pitting them against Real Madrid in the Spanish Super Cup, Valdťs recalled the flurry of games the two teams fought out at the end of last season: “it was a very intense month with a lot of media focus –these games are always like that”.

Praise for Cesc and Alexis

Whilst explaining that he was: “a little disconnected” from the transfer market speculations at the moment, he expressed his conviction that Cesc Fabregas: “is excited about coming back here and I’d like that. His way of playing would mean he’d have no problems adapting and he’d bring a lot of quality”.

Valdťs is also familiar with Chile international Alexis SŠnchez: “he surprised me at last year’s World Cup. He’s very good, very fast and his main virtue is his ability to beat a man. He is undoubtedly a really valid option and a very good striker”.

Support for Bojan and Messi 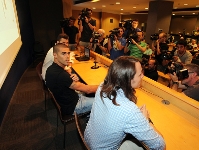 As to the possible departure of Bojan Krkic, Valdťs commented: “if it’s confirmed, then I’ll be losing a mate. I just hope he is happy and things turn out right for him”. Asked about Leo Messi’s form in the Copa America, Valdťs insisted: “everyone knows the quality he has -he’s the best in the world and he will always show that”.

The keeper was speaking at an event held to mark the launch of his website at the Ricard Maxenchs Press Room at the Camp Nou,