Messi at his best to classify Argentina (3-0)

Messi at his best to classify Argentina (3-0)

Argentina, blessed by Leo Messi at his best, beat Costa Rica 3-0 to reach the quarter finals of the Copa America. The Barça star set up two of the goals and put in a man if the match winning performance.

Argentina swept aside any doubts arising from their first two games in the competition to beat Costa Rica 3-0 and book a place in the last eight. Led by a brilliant Messi, Argentina gave their opponents no chance and ran out comfortable winners. 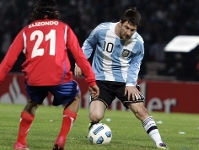 With Milito, Mascherano and Messi again starting, and with Agüero, Di Maria and Higuaín drafted in, Argentina soon took control and Costa Rica found themselves defending with their backs to the wall. Kun eventually put the hosts ahead before half time, after wasting a number of earlier chances.

After the break, though, Argentina pressed home their advantage with Messi setting up first Aguero for his second goal on 52 minutes and then Di Maria for the third just eight minutes later.

gentina will play their quarter final next Saturday night against the second placed team in Group C- Chile, Peru or Uruguay.