Andrés Iniesta is looking forward to the new season with Barça. He was speaking at a testimonial in his hometown of Fuentealbilla.

He added that “the most important thing is to stay enthusiastic, and not to lose the desire to do things well”. The midfielder predicts “another year with a lot of pressure, every season is difficult”.

Iniesta also spoke about his winning goal in the World Cup final. “On July 11, my football career touched glory, the sky, but today I’m thrilled to see so many people here and fill me with pride”, he said on the Fuentealbilla town hall balacony, addressing thousands of fans. 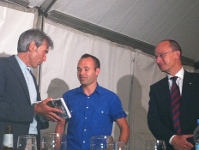 Andrés Iniesta had a busy Saturday. At midday he was in the town hall and in the evening he was a guest at the VII Meeting of Castile-la Mancha supporters clubs, organised by the PB Andrés Iniesta-Fuentealbilla. The gala supper was held there, attended by 800 people from 41 supporters clubs. Iniesta was clearly grateful for everything done in his honour.

Also attending was vice president Jordi Cardoner, who spoke about his player’s “amazing human qualities.” Cardoner also praised everybody involved in the Castile –La Mancha supporters movement, and specifically those from Fuentealbilla. Former player Lobo Carrasco was also there on such a memorable day for Iniesta.