Pedro Rodríguez signed a new contract on Thursday that keep him at the club until June 30, 2016, with a buy-out clause of 150 million. “This is great news. I am very happy to have renewed again” he told Barça TV and fcbarcelona.cat.

More info
The Canary Islander did the duties in the club offices in the company of president Sandro Rosell, vice president Josep Maria Bartomeu and Sports Director for Professional Sport Andoni Zubizarreta. “The club still has its faith in me and that’s very important.” He said. “I am very satisfied with the way things are going. Since the very start, the directors, my team-mates and the coach have trusted in me”. 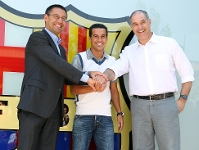 The striker, whose buy-out clause has been increased from 90 to 150 million euros, explained what the challenge ahead is. “I try to work hard all season to improve and keep helping the team. I think things are going well. I hope to continue working like this and to carry on doing good things here”.

Pedro has scored 45 goals in the last two seasons, including one in the Wembley final, but his desire to win has not floundered. “One can always get better. And I think the team is getting more united with each season. We have a better relationship with each other and that shows on the field” he said. 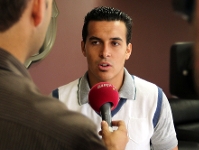 As for the forthcoming campaign, he said “we know it’s getting harder each year because teams have a greater desire to beat you and so they sign reinforcements. It’s hard, but we’ll take things a game at a time and try to win more success this season”.