Zubi: “90% of signable players are at Barça”

Zubizarreta: “90% of the signable players in the world are at Barça”

Apart from confirming the signing of Kiko Femenía, the sports director for professional football, Andoni Zubizarreta, and vice president for sport of FC Barcelona, Josep M. Bartomeu, have spoken about possible comings and goings ahead of next season. 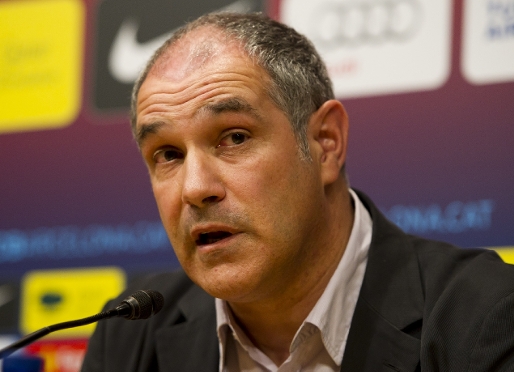 Both Zubizarreta and Bartomeu spoke about Jonathan Soriano, Jeffren and Bojan, all of whom may be leaving the club. The former said he is looking for a solution for the top scorer in the second division. “He contributed a lot to the team this season and we are working with him and his agent to find the best option. We hope a good offer comes through, both for him and the club. If there is none, Jonathan still has a contract with Barça B, so he will join us for training on the 11th and will work normally, despite knowing that he has no chance of moving up to the first team.”

Seeking offers for Jeffren and Bojan

As for Jeffren, Zubizarreta has said the market situation is not good for the Venezuelan born Canary Islander. “We are working to find the best solution for the player, but the negotiations are taking a long time because the market isn’t improving and there aren’t many offers coming through” said the former player. Finally, Josep Maria Bartomeu said that the club is still looking into the offer that Roma has made for Bojan Krkic, as announced by spokesman Toni Freixa a few weeks ago.

At Eusebio’s presentation, reporters were also asked about new signings for the 2011/12 season. Andoni Zubizarreta mentioned Thiago and Fontŕs: “We will continue with the philosophy of searching at home, which is shown by the way two players have been promoted to the first team: Thiago and Fontŕs. Thiago, was probably the best player at the recent European Under 21 Championship, and Fontŕs is a centre back that would be in the first teams of 80% of the clubs in the Spanish First Division”.

Bartomeu also spoke about Cesc Fŕbregas and the state of the negotiations to bring him back to the club. “We know what we have and what we need and we have until August 31. Last year, Mascherano arrived in late August, while Adriano came in early July. Our first team is a great one, the best in Europe, with great players and coaches … 90% of the signable players in the world are at Barça”.