On Wednesday, both the FC Barcelona first and B teams received awards for fair play. Both teams were top of the table in their respective leagues. 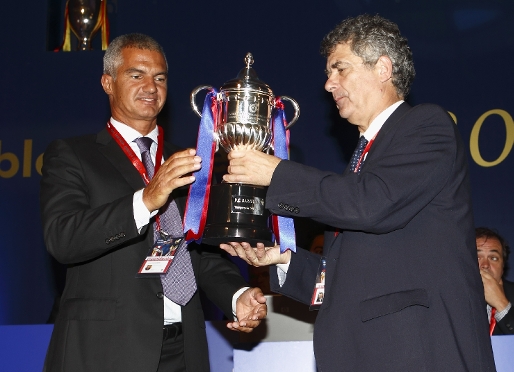 At the General Assembly of Spanish Football on Wednesday in Las Rozas (Madrid), FC Barcelona has been presented with awards for topping the fair play tables in both Division One and Two. This is the third time the Barça first team has received the accolade after also getting it in 2006 and 2009.

Barça was represented by Javier Bordas, the director who represents the team in relations with the Liga de Futbol Profesional (LFP) and the Real Federación Espańola de Futbol (RFEF).

Josep Guardiola’s team got 100 points, the lowest total in the First Division, just one less than Mallorca (101), and three less than Racing Santander (103). This was calculated on the basis of the 95 yellow cards and two red cards shown to players over the season. A yellow is worth one point and a red three.

Barça B top in second division

The B team was also the fairest in its league, with 107 points. This was the result of 97 yellow cards and 5 reds, but all of the latter were for two bookable offences, which count for two points.