Masia shows its worth

Masia shows its worth

The Club’s coaching directorate have always defended the need to prioritise home grown talent and give the youngsters a chance to shine and last week’s contract extension for Thiago Alcántara is the latest example of this policy.

The Club announced last Wednesday that they would be extending the contract of the latest gem to come from La Masia –Thiago Alcántara - a uniquely talented midfielder. Barça have always looked after their young promises, but the arrival of Pep Guardiola and the presence last year of Andoni Zubizarreta, has meant a big increase in the number of La Masia graduates making it through to the first team.

Squad can be “stretched” with B team talent 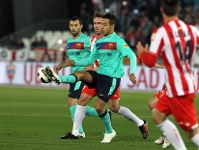 Zubi made it clear when he was named Sporting Director that the first team squad could be “stretched” with the addition of players from the talented B team and last season 11 players under Luis Enrique’s orders figured for the first team: Fontŕs, Nolito, Sergi Roberto, Víctor Vázquez, Thiago, Mińo, Bartra, Sergi Gómez, Jonathan dos Santos, Oriol Romeu and Montoya. This is the largest number of B team players who’ve been in the first team for many years. 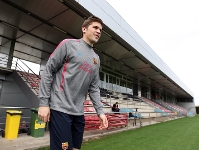 One of the toughest moments of the season for the Club was Eric Abidal’s illness, but the coaches knew that in Andreu Fontŕs they had a more than satisfactory replacement whilst the Frenchman made his recovery and the youngster played six league games in all, as well as the Champions League match against Rubin Kazan,when he scored. Once again, the Club showed that instead of searching in the markets, they could choose from their own youngsters and be just as successful.