The Club’s Sporting Director of Professional Football, Andoni Zubzarreta can look back on his first year in the post with great satisfaction , with the 3 titles for the 1st team, a 3rd spot for the B team and a treble for the Youth team. 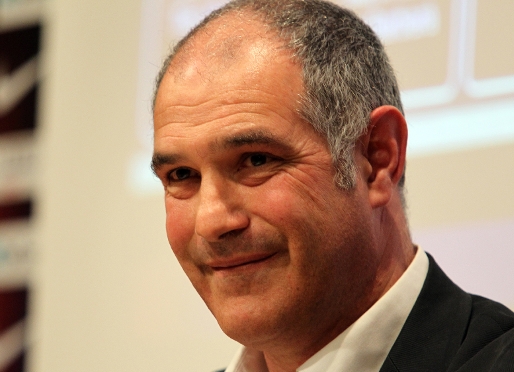 One of new President Sandro Rosell’s first decisions was to replace Txiki Begiristain with Andoni Zubizarreta and divide the football section into two parts: professional and academy. Zubi was to be the man in charge of the first team, B team and Youth teams, working hand in hand with Narcís Juliŕ and Albert Valentín. The ex-Barça keeper, who recently renewed his contract until 2013 has worked with enthusiasm, commitment and discretion and enjoyed a year of great success. 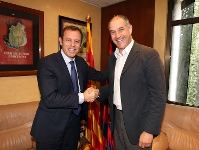 Guardiola’s team had finished the 2009/10 season with four titles and really set the bar high. Small changes were needed and the squad remodelling was to be carried out with two main ideas: the economic conditions and the need for any new signings to easily adapt to Barça’s style of play.

Andoni Zubizarreta made his first move by bringing in two players - Adriano and Mascherano. Two versatile players who fit into the Barça philosophy, whilst Chygrinski , Ibrahimovic, Touré, Marquez and Henry all moved on. 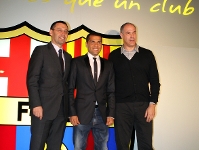 Once the season had begun, it was time to renew the contracts of the backbone of the team which was making history and one by one, Sergio Busquets, Dani Alves, Seidou Keita, José Manuel Pinto and the two masterminds behind the team Guardiola and Tito Vilanova passed through the President’s office to sign up for their contract renewals. The sporting directors and Club Vice President Josep Maria Bartomeu were also quick to snap up Ibrahim Afellay in the winter transfer window.

All that work has brought the Club plenty of titles this season: the first team taking the Spanish Super Cup, La Liga and in brilliant style the Champions League, the B team coming third in the Second Division and the Youth A team also winning a treble. Zubi has put in a great first season and continues to work for new success in the future.