Last session of 2010 held in the rain

Last session of 2010 held in the rain

The squad had their final training session of 2010 this morning. Eighteen players worked out under a continuous rain under the watchful eye of coach Pep Guardiola. 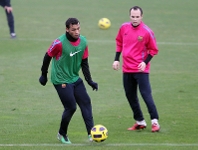 The session focussed on preparations for Sunday’s game against Llevant at the Nou Camp and with Jeffren and Milito now back after injury, the boss called up three youngsters from the B team to make up the 18 players.

Víctor Vázquez in, Mińo out 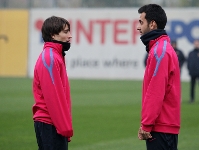 Mińo was present on Thursday, alongside his B team teammates Thiago and Bartra, but Guardiola decided to do without him today and brought in Victor Vazquez.

Once again Carles Puyol was missing from training following his injury whilst playing for Catalonia in the game against Honduras on Tuesday that will keep him out for between 7 and 10 days, as was Messi, who has been given permission by Guardiola to return this weekend. 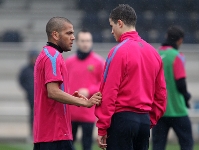 Ibrahim Afellay seems to be fitting in with the rest of his new teammates and in the ball possession exercises at the start of the session, he impressed with his control. 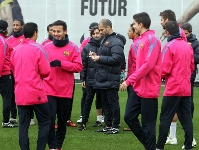 The squad will be back in training on New Year’s Day at 12.00 at the Ciutat Esportiva Joan Gamper, following which Josep Guardiola will speak to the media.